Plotting and Viewing 3D Bars on a 3D Surface

Hi all. I would like to plot 3D visualisations (bars, contours, etc) on top of a 3D surface.

In my case, the surface is a football pitch, but I have heavily simplified the code to just show a green surface (where all z-values are 0) and some 3D bars which all shoot upwards from z=0.

The problem: the bars are invisible from most angles, as Matplotlib is prioritising the surface/collection over the bars (apologies if I’m mixing up technical terms!). I have tried playing around with zorder values, but to no avail.

After a lot of googling, I eventually found an FAQ page which appears to confirm my fear that what I want to achieve is not yet possible in Matplotlib, but as I have invested so much time and effort into this project and was otherwise extremely happy with how the finished product was looking: is there any way this can be done? Thanks so much for any responses 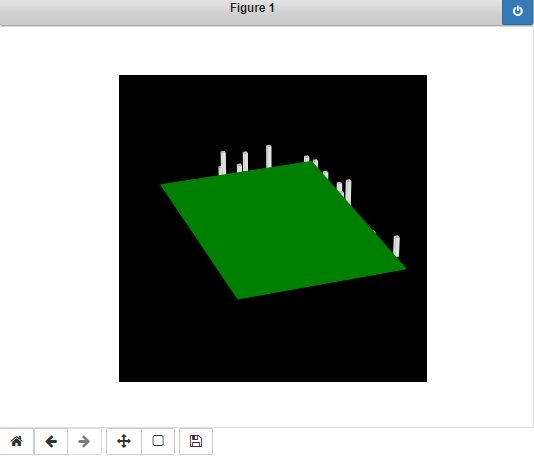 “After a lot of googling, I eventually found an FAQ page…”

It looks like your grass is at z=0; I wonder if using the Axis panes would work? So instead of ax.set_axis_off, change the z pane to green with ax.zaxis.set-pane_color (and make the others transparent):

For some reason, .set_pane_color only accepts an RGBA tuple, so you can’t pass 'green' directly.