quoting from the site

Of course I don't have anything close to a scientific study of the following statement, but I suspect in practice (ie as polar coordinates are used in practice by working scientists), they expect to find values of "r" consistent with the above definition of unique - however, still wanting theta to not be bounded.

Taking another quote form the site

'''
Also, a negative radial coordinate is best interpreted as the corresponding positive distance measured in the opposite direction.
'''

''' as matplotlib is - neg_r.png '''
import numpy as np
import matplotlib.pyplot as plt

The second produces a curve which I say represents the natural definition of "opposite". Note, the tangents of the curves are also opposite as well

''' as matplotlib "should be" - neg_r_opposite.png '''
import numpy as np
import matplotlib.pyplot as plt

I have three points to make with these plots:
1) my definition of opposite makes more sense than the default behavior of matplotlib
2) other people may have different ideas about what is best
3) matplotlib should at least raise a NOISY warning about what it is doing. 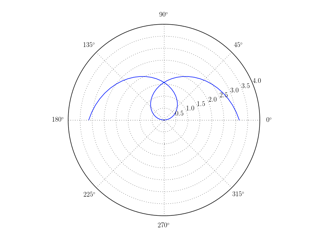 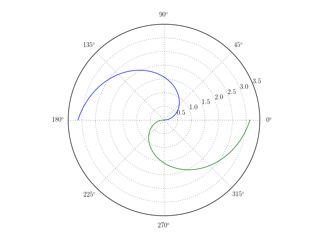 Maybe I’m just not seeing it; I don’t see how the definition on wikipedia, your definition, and matplotlib behavior differ.

Comparing blue and red, you can see how mpl handles a negative r; each point is ‘opposite’ just as described.

Comparing blue and green, you can see how mpl handles a negative angle. green curve increases in as you go clockwise, which is correct.

Is this in reference to issue #1603? Are you advocating changing the solution?

My only point was that the ongoing conversation should
not accept uncritically the assertion that r<0 is senseless.
Thus I cited one example of the common acceptance of negative r:
http://en.wikipedia.org/wiki/Polar_coordinate_system#Uniqueness_of_polar_coordinates

I am not advocating a position on whether Matplotlib should enforce a unique
representation, although that seems very doubtful to me.

Sorry -- I hadn't meant to be terse: I hadn't realised until now that this was related to the other thread. I think it's an interesting discussion, and we should probably find some way to address it -- perhaps that means that `polar` grows an option to affect negative handling.

Is this in reference to issue #1603? Are you advocating changing the
solution?

My only point was that the ongoing conversation should
not accept uncritically the assertion that r<0 is senseless.

and I finally appreciate that criticism.

I think it is clear to all on the list, that at first, this notion railed against my senses.