I fiddled around with the mplot3d axes3d panning today with some
useful results. I've never submitted a patch before so please let me
know if I did so incorrectly.

On a related note, I noticed that middle mouse click+drags were not
triggering 'motion_notify_event' events with the mac osx backend.
However, when I Option(Alt) left mouse click+dragged The events were
being triggered. I'm not sure if this is a osx thing or something to
do with how the backend is passing on the event.

Thanks for this, but if I recall, the panning feature was disabled because of problems with (not) clipping the image outside the viewing area (which is noticeable when doing subplots). Which backends have you tested this for? Note, I haven’t time to test patches to mplot3d for another 2 weeks.

As an additional request, the mouse_init() function should have another keyword argument added for pan_btn=2, and then use that to initialize self._pan_btn in the function. Then, instead of checking if the button number is equal to 2, it should compare against self._pan_btn.

Thanks for catching that! I added the changes to mouse_init and
improved the panning so it works more consistently at different 'zoom'
levels and attached an updated patch.

I tried to sort out the clipping issue you mentioned but failed to
wrap my head around how to clip the 3d data. It looks like (at least
in the svn trunk) there is no clipping of the 3d data (I tried
panning, zooming, and changing the axis limits and saw no clipping).
I'm also unsure how to make 3d subplots. I might just be too lost to
fix this one but if I make any progress I'll pass it along.

I tested this out on the MacOSX and TkAgg backends (the only ones I
have available on this machine). The MacOSX backend suffered from the
bug I mentioned earlier (no 'motion_notify_event' for click+drag
middle mouse) but the TkAgg worked fine.

Ok, so you do see that the 3d image is not clipped when panning? I believe this is an issue with the backend’s interface with mplot3d’s special axes, and it is certainly not trivial. Until such issue is resolved, it is probably best to continue disabling the pan feature.

By the way, subplotting 3d figures is a new feature made available in version 1.0. It is very easy. While you still have to use the same import command as before, you can now create a subplot axes of type 3d by doing:

As for the issue with the MacOSX backend, you might need to file a separate trouble ticket for that.

Thank you for helping to improve matplotlib!

I tested the subplot clipping out with the TkAgg and MacOSX backends
(two subplots side-by-side) with the these results:
1. the 3d points in one subplot do not extend into the other subplot
(the unseen points: [2,2], [3,3], [4,4] in the left subplot do not
appear in the right subplot)
2. the 3d points in a single subplot can appear outside of the drawn
3d axes (as seen in the right subplot)

The clipping error (2 above) within a given subplot is not related to
the panning code (the attached plot was not panned) and occurs
whenever the axis limits are changed from their autoscaled values
(either by set_xlim etc, by zooming, or by panning). 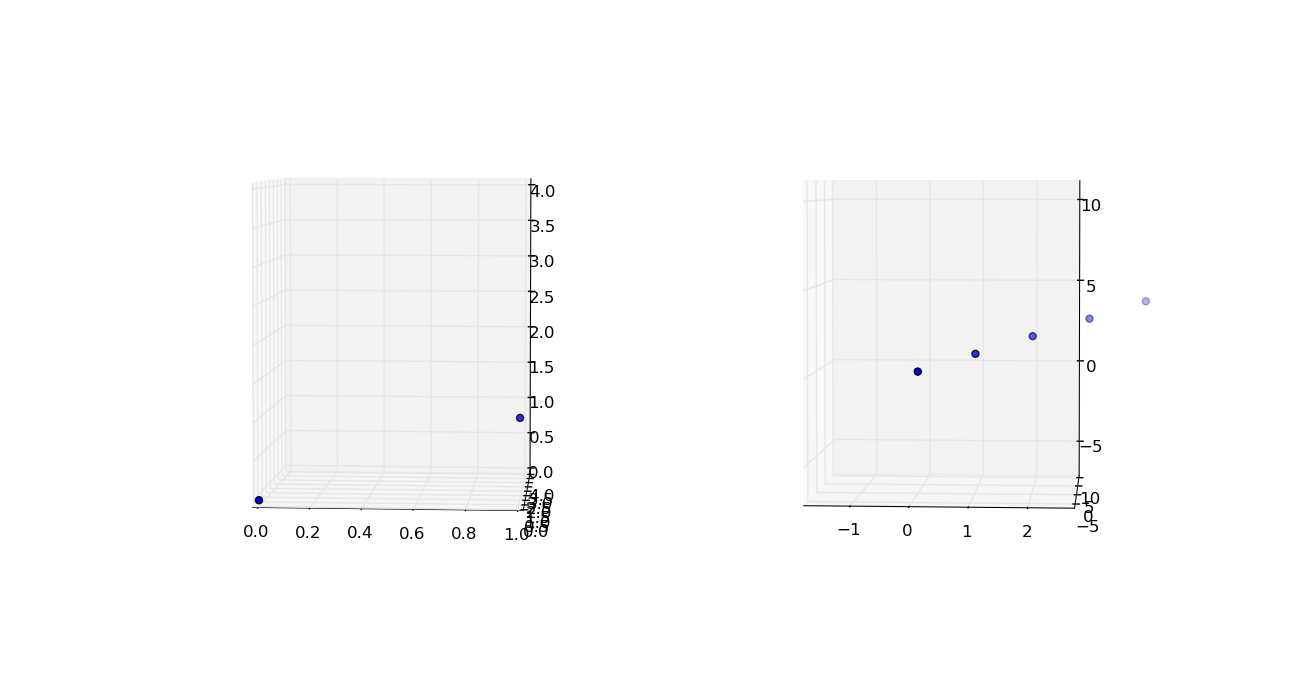 Right, this concurs with my observations when I was fiddling around with mplot3d code over the summer. I am not exactly sure exactly where the fault lies, but it is related to the Agg backend renderer either not being told what should be clipped out, or is not understanding the information coming from mplot3d to know what should be clipped. This will happen in any sort of situation that moves the plot from the original view.