I'm having trouble getting the alpha keyword to do anything

> when I use the OO interface (as per gtk embeded example).

I'm not sure about the exact status of alpha vis-a-vis alpha - perhaps
Steve can clarify. a gdk.Color does not have and alpha channel, nor
does a gdk.GC, but a gdk.Pixbuf does. Basically, alpha is (mostly)
unsupported on the GTK backend (you can do alpha blending of images
because antigrain handles images across backends).

But you should probably be using the gtkagg backend, which has alpha
support for all plot elements, and does a better job of anti-aliasing.
In some measurements, eg animation, it is a little slower than the
pure GTK backend, so you may want to do a little profiling. It will
probably be faster than GTK for large collections, perhaps 2x or so,
since it does the collection drawing in extension code and the other
backends have a python implementation.

> Aside from this, I'd just like to say what a great package
> matplotlib is. I've been using it a lot the last week to
> plot maps -- first I started using pcolor to plot hurricane
> footprints (I'll see if I can get the OK to release some of
> the plots, pcolor produced some wonderful pictures with a
> few lines of code).

if/when you have regularly spaced grids, imshow will likely be an
order of magnitude faster than pcolor for large data sets, so keep it
in mind....

> Inspired by this I've also been plotting simple maps by
> creating collections of polygons (eg one polygon for each
> country in the world) + associating a value with each
> polygon. Again, great pictures in a few lines of code +
> using the collections the speed is pretty good, even with
> 3000+ polygons it was all pretty snappy.

> I'll see if I can get an example together -- to do this I'll
> need to get some un-restricted shape files, but I'll see
> what I can do.

That would be great - I'll keep my eyes peeled...

Thanks very much indeed – that has me sorted.

I’ll give imshow a go as well when I get a chance.

I’ve attached an image of the results to give you an idea what I’m up
to.

I can’t praise matplotlib highly enough, it has done 90% of the hard
work in getting a very handy mapping tool together in a matter of days.

Hope Santa brings you what you deserve. 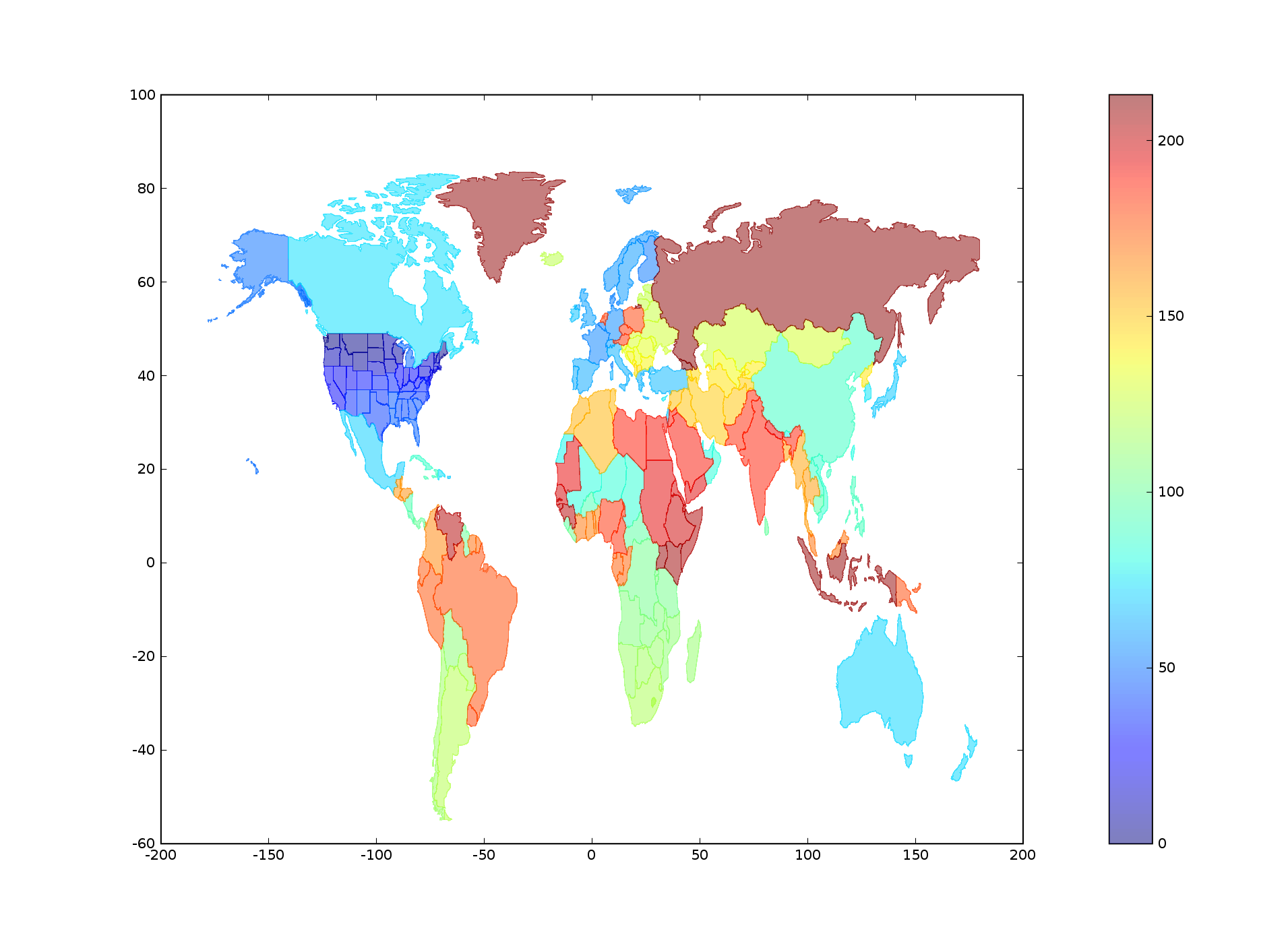